Every year, the Gourmet Festival in St. Moritz presents a certain theme or country. British, French, Italian - all have already inspired the participants. Japanese?  Something as exotic hadn't been attempted before, some of the more regular attendees told us. For us, as first time visitors to the St. Moritz Gourmet Festival, it was an exciting premiere.

Among the numerous events which took place during the week, we attended one evening event and two during the day. We will shortly present here the different impressions left behind by those three events:

The organiser of the High Alpine Sushi was the Hotel Restaurant Ryokan Hasenberg, that had made the journey to St. Moritz with its head chef Akihito Suzuki as well as other known staff members.

The dishes were served throughout the day at 2'486 meters above sea level in the middle of the Corviglia ski resort at Mathis Food Affairs with a magnificent view over the Alps - a delightful combination. 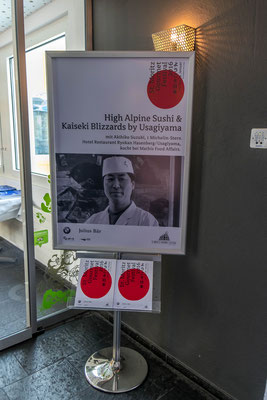 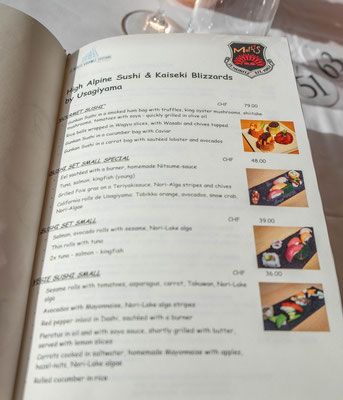 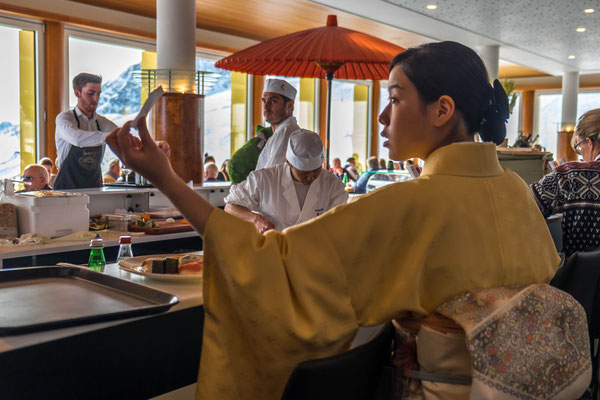 The gourmet set consisted of the following :

The starter consisted of a mix of octopus and olives served with wasabi chips and tomatoes. 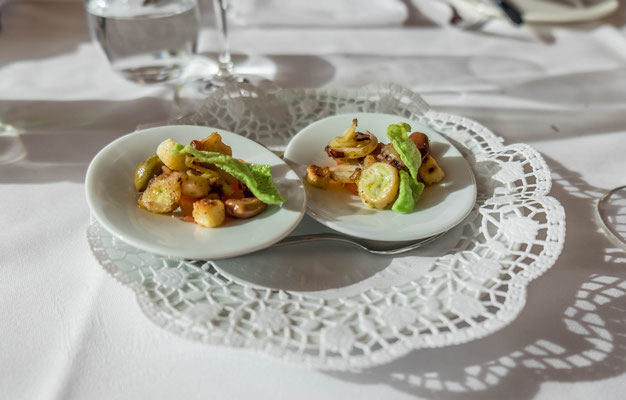 The 4 gourmet hors d'oeuvres truly earned their name: all were delicious in their own right and were served in a fitting fashion, from delicate to hearty. The smooth combination of the ham and truffle thrilled us most, the cucumber and the caviar were refreshing and the wagyu beef melted on one's tongue, as you'd expect. The mild wasabi solely surprised us a little: maybe one didn't want to confront the sushi newcomers with too much spice.

We do not want to linger too long on the smaller sushi set. The quality didn't compare to the one we were served with at the Ryokan Hasenberg's open house day. The fish was sliced a little thin and the freshness you'd expect from a 1 Michelin star establishment was lacking. However, it is worth mentioning that we did book the first evening for the High Alpine Sushi event - maybe it got better as the Festival went on. 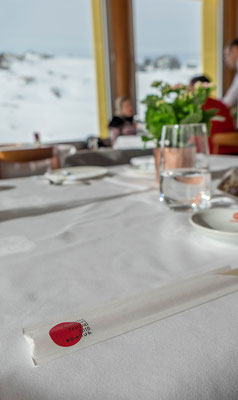 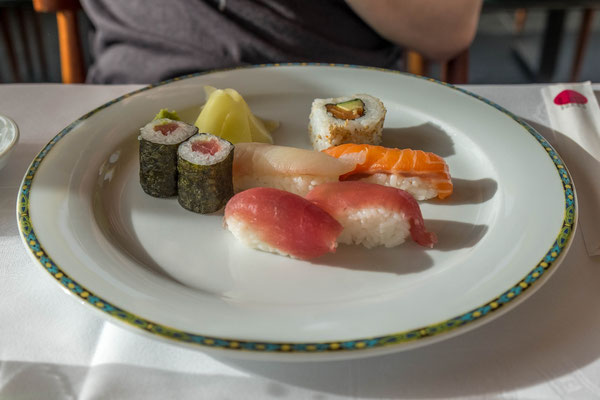 Even though the event organised by the Confiserie Sprüngli didn't have that much to do with Japan it still ended up being a secret favourite of ours. The reference to Japan was notable though its Praliné du Jour "Green Japan", that was created especially for the occasion by Chef-Confisier Stefan Gerber. In addition to the Praliné, the visitors could look forward to a remarkable buffet with a wide selection of fresh, fruity and chocolaty specialities. For CHF 40.- you could eat to your heart's content as well as order a warm beverage: fortunately there were three kinds of Japanese green tea on the menu.

Furthermore, the choice of "Le Grand Halle" in the traditional hotel Bardutt's Palace seemed most well suited place for an afternoon tea. 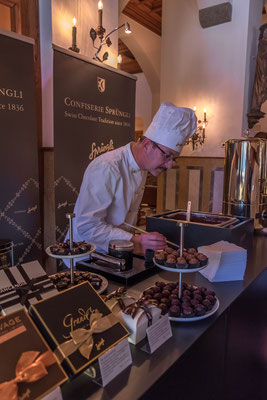 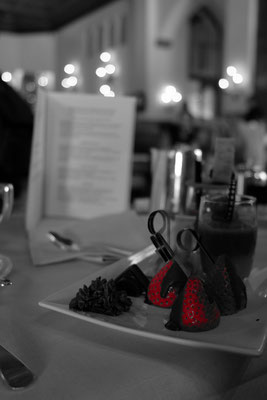 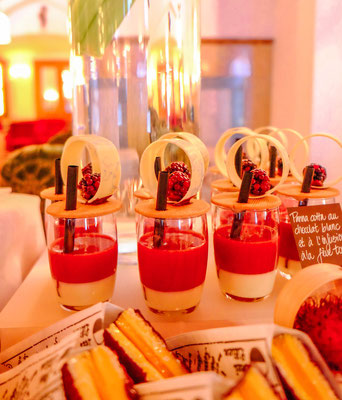 The buffet tended to every possible wish: regardless if one is a fan of dark or white chocolate, liquid or hard, bitter or fruity - everyone found their personal highlight. For us it was the "snowball": a small white chocolate ball adorned with grated coconut from which a deep red berry sauce would pour dramatically out of onto the plate after being opened.

A final word concerning the "Green Japan" Praliné: it consists of a delicate almond gianduja, japanese matcha as well as hand picked almonds covered in green tea. The typical matcha taste is very discreet and would be a treat even to those who normally would need convincing conceding the green powder. Talking with Stefan Gerber, you could feel that he would have preferred to give the Praliné a somewhat stinger matcha note - however, at least this way it'll delight the taste buds of everyone. 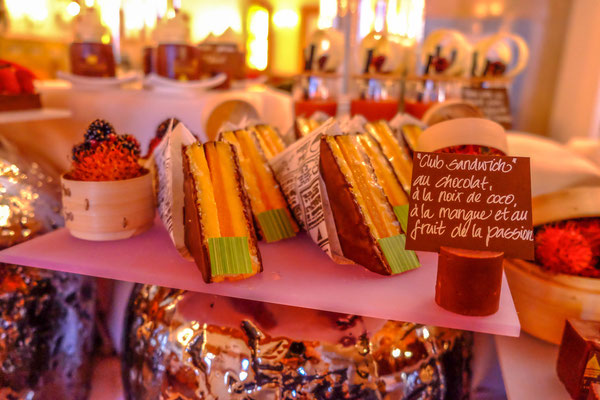 Now to the actual highlight of our trip to the Gourmet Festival: "Japanese culinary craftsmanship & the italian art of fine wine". This dinner was all about the meeting of 2 Michelin star distinguished Hisashi Nakahigashi and the wine maker Nicola Manferrari. The first being most notable known for his "Tsukimusa" ("freshly picked") cooking style, that some also refer to as the Japanese variation of "NOMA", and the second cultivates in the "Collio" region in the Friaul province a small quantity of high-quality white and red wines.

For those expecting a symbiosis of the two arts, and that for CHF 200.- per person, could only be disappointed. Two excellent creation and an occasional taste success, yet, but no fusion. After asking about an ingredient in the starter, and the waitress disappearing to the kitchens for an unconventional amount of time, we were only offered an vague apology about everyone being very busy at the moment. We dare say it was rather due to a language barrier.  It is interesting to note that the organisers, only days before the beginning of the festival, has noticed that Chef Nakahigashi, didn't speak very well English, but was fluent in French. This shouldn't come as such a surprise as Nakahigashi studied under Alain Ducasse for a number of years. The organisers admitted openly that the two main protagonists, due to this misunderstanding, didn't have much of an exchange.

Another, almost comic, episode were the never ending speeches by Nicola Manferrari, who over several minutes would present his wines. The Italian-German simultaneous translation was amateurish at best, which encouraged one of the 30 guests to voice his opinion across the room.  What is a pretty rare occasion at a black tie event.

In contrast to the extensive wine presentation, no explanations were given to Nakahigashis culinary talents. The Chef honoured the guests with 2 to 3 short sentences in English. A few words to his creations would have been welcome, especially considering that all the other guests at are table had never set foot in Japan.

Nevertheless, the wine and the dished, taken separately were fantastic and deserve to be presented. 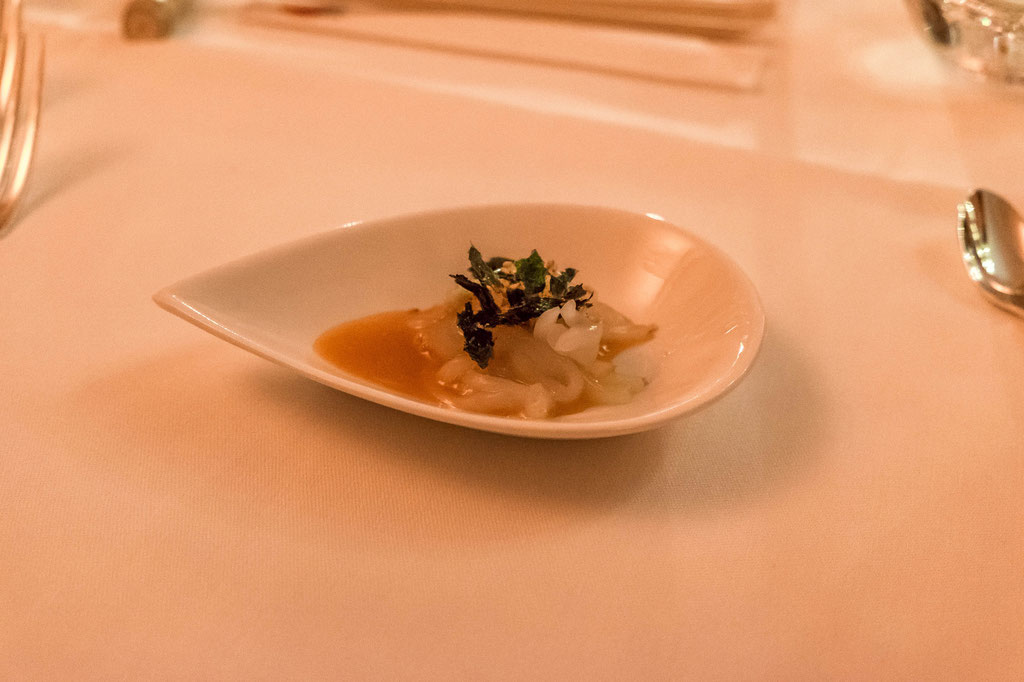 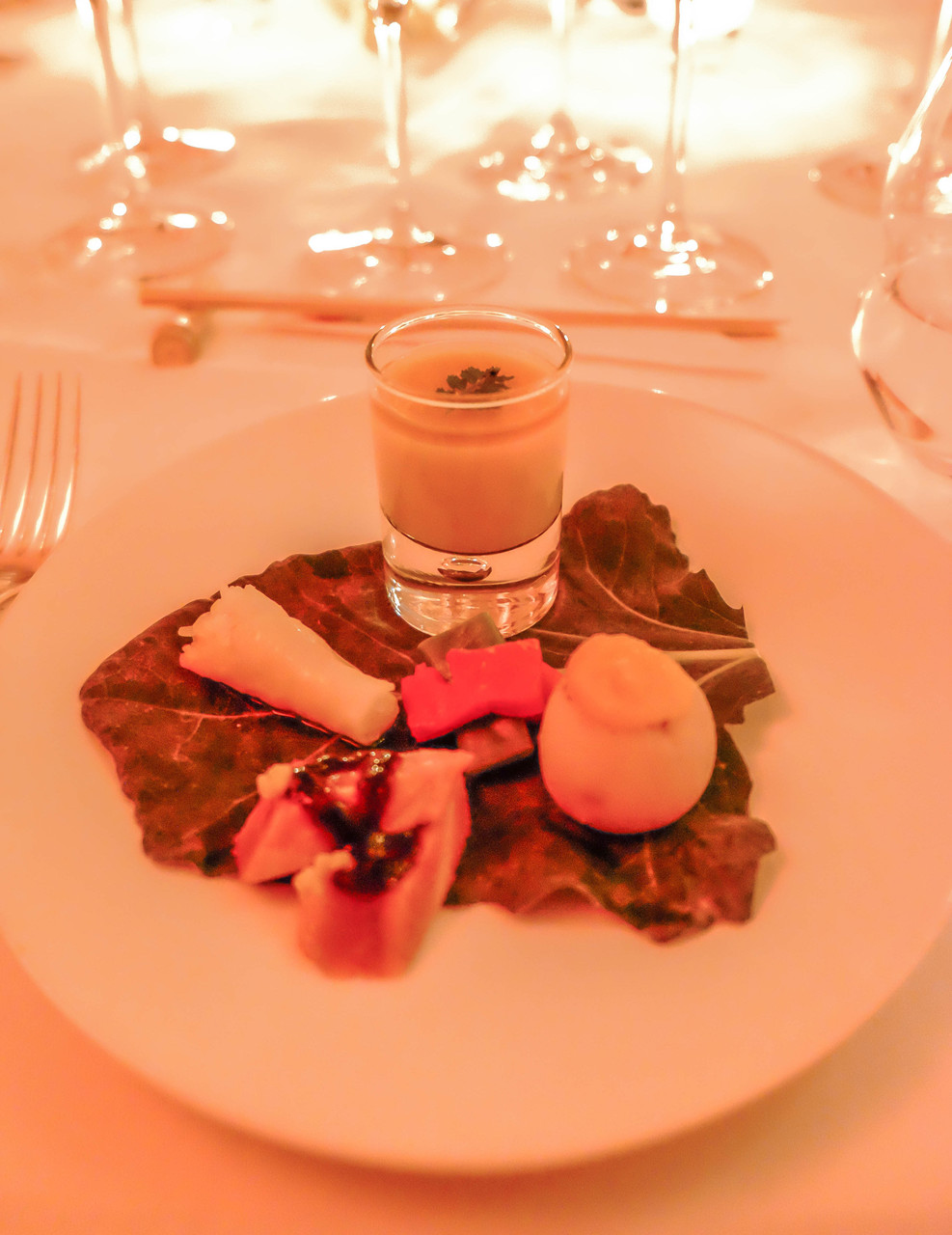 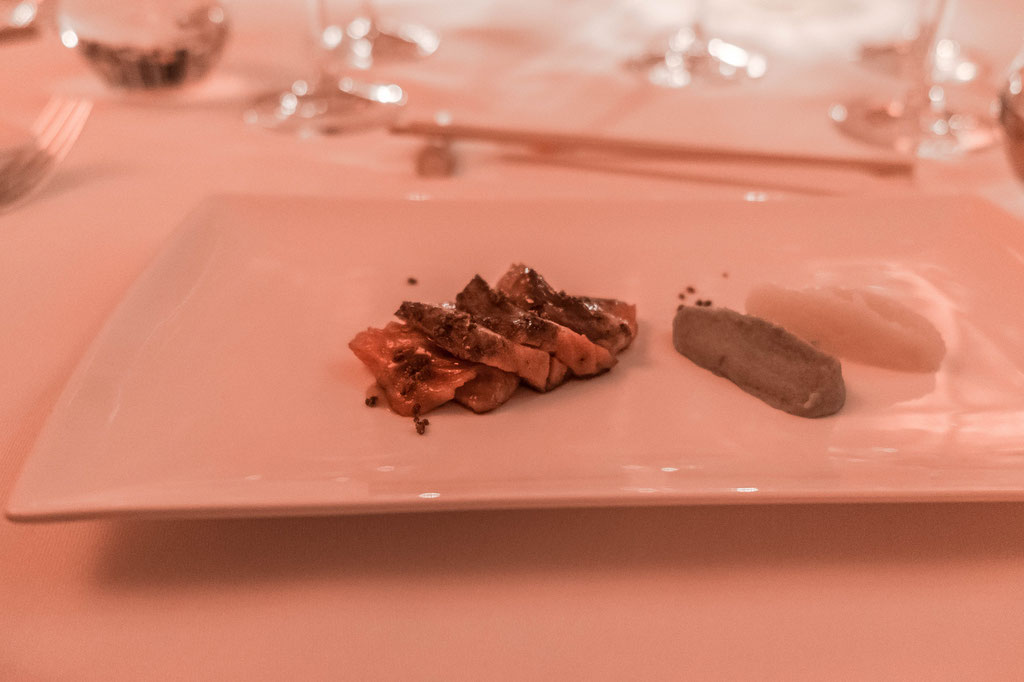 Every course was top-class: the shrimp tempura was wonderfully crisp on the outside without being too oily, and the shrimp had exactly the right consistency. The bitter leaves gave the combination an amazing twist - we would love to know what they were. The accompanying white wine was crowned best wine of the evening by a selection of guests.

The first course was extremely fresh: the egg yolk and the nori were a nice combination.

The hors d'oeuvres were excellent - especially the Chawan Mushi. Which of the five hors d'oeuvres the wine was meant to accompany, was unclear, however the wine being light and unobtrusive, it fit well.

The main course was unsurprisingly the highlight of the dinner: The wagyu beef had the most delicate consistency that we have ever tasted. The asparagus sauce matched it perfectly. The merlot had a surprisingly fruity note and we, as well as the other guests at our table, only wished we had a wine cellar full of it.

The desert was described as a "flavoured dumpling" in the menu, even though it consisted of Muchi (a rice dumpling) with a more rubbery texture. This is quite a unusual combination for western pallets, which was the cause for more than a few surprised looks among the other guests at our table. Altogether, we found this course to be the strongest, especially as the matcha cream was extremely well made.

Unsurprisingly, the Sprüngli Pralinés rounded off the dinner. In their known excellent quality, they were quickly eaten and held up back from ordering a club sandwich at our hotel lobby afterwards. 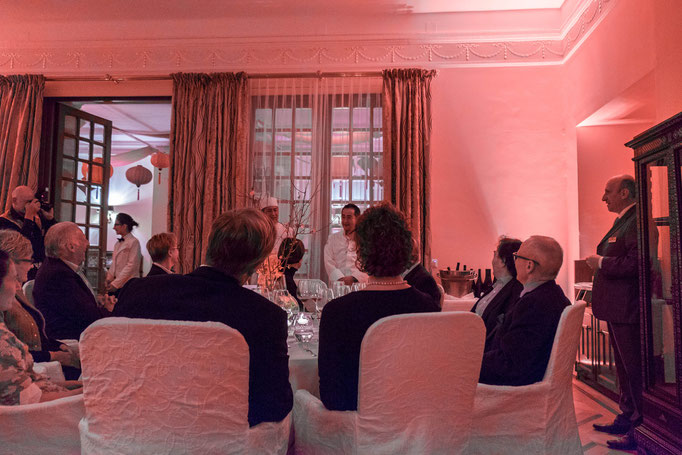 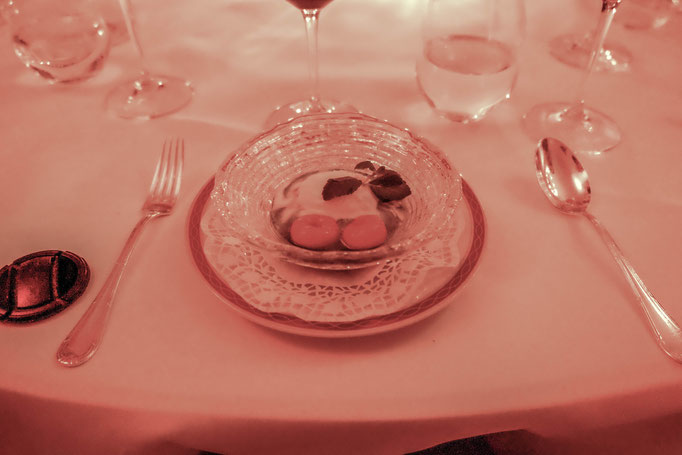 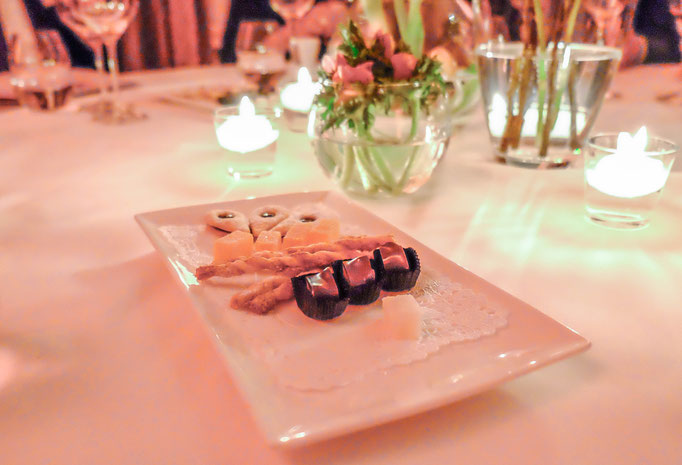